As part of my endeavors while staying with my Grandparents this summer, I have been researching the families history. I have never, previously, been particularly interested in genealogy or my family history. I thought it always a little bit strange because many people come to it as trying to find out who they are. I've always thought that searching for some sort of justification of self is silly.

However through my growing interest in history and the development of the American West I have come to the point of researching portions of my family history and where they were in it all.

This is the back of the photograph, because I find the back just as interesting.

James Hamilton Photography, Sioux City, Iowa
James Hamilton was a pioneer photographer who was born in 1839 in Kentucky, according to the book, Pioneer Photographers from the Mississippi to the Continental Divide, A biographical Dictionary 1839-1865. He ran a photography studio in Sioux City in his later life and is known for his stereographic series of farms, Indian chiefs, camps and burial grounds.

In 1851 at the age of 30 he married, Cathrine M. Duggan, also an immigrant and a Catholic from Ireland. She has the same birthday as myself, September 8th -- but she was born in 1831 in Shandagan, Ireland.

The date of this photograph is unknown but because it is a cabinet photograph the rough date can be assumed by looking at the aspects of the card, although it is still not completely accurate.

The Cabinet Portrait format was not universally adapted until 1870.
This card has rounded corners, is quite thick and it has very large logo on the back which according to one source would put it in the 1880's.

This photo is a classic example of Cabinet Photography, the original print is on a 4 x 6 inch poster board.
Cabinet photography began taking the place of Carte De Visite process as early as 1860 but had been replaced by home photography snapshots by 1900's. The Cabinet photograph was an albumen print and the biggest difference from the prior popular process was that the cards where easily displayed on mantels and cabinets, thus the name. Prior to being used for portraits the cabinet print was used horizontally for landscapes. The backs of the cabinet portraits often had complex logos advertising the photographer, as does this photograph of Catherine Duggan/O'Connor.

In 1852 at the age of 31 he relocated with his wife to New York City where he worked as a carpenter and had their first son, My Great Great Grandfather, Cornelious J. O' Conner on September 22nd 1855.

He stayed in New York for five years until He took the steamboat up the Missouri River to the town of St. Johns City in 1857, which was a Catholic Irish colony formed just the year before in 1856. This was also during the time of the mad rush to the west, included in their numbers were the Mormons, and Nebraska was generally the jumping off point.

Nebraska was on the edge of the "frontier" at that time and the area had many violent encounters with Native Americans, amongst them --
In 1857 on March 8th, 140 miles away in Spirit Lake, Iowa a "renegade" Dakota chief, Inkpaduta, attacked and massacred the population amongst the homesteads. This was not the first homestead they had descended upon. This was in retaliation to several injustices served to the Native people by white settlers.

Most likely due to Corneliuses military connections from the Mexican War, he was appointed by the Governer of Nebraska territory in 1858, which was William Alexander Richardson at the time, to be the captain of a company to suppress trouble with the Native Americans. He was then Captain Cornelius O'Connor.

The captain was a very busy and involved man in the progression of Nebraska.
In1858 he became the assessor in St. Johns during the very fist election held there. He served in the 8th and 11th territorial legislature during a time when the country was at odds with each other. He was a staunch democrat and supported those principals during this time. He was a delegate for the Nebraska constitutional convention when the Nebraska received it's statehood in 1867. He was the director of the dakota county school for twenty years and a charter member of the Farmers Club in Dakota County.

When first coming to Nebraska they lived on a land claim on Elk Creek where they lived in a one bedroom home with all of their children, until they started planning their huge, 14 bedroom, home on 1,000 acres just outside Homer, Nebraska in the bluffs. The Captain was a carpenter and contractor and supervised the building of the home along with doing much of the work himself.

I have found conflicting dates about the start and the finish of the building. One source says it was started 1865 and completed in 1875. The museums website says the home was started in 1875 and fully complete in 1879 -- although they had their eldest daughter, Helena's Thomas Green's, marriage breakfast in the home in 1875. Even that is a conflicting date because another history says Thomas Green married Helena O'Connor May 2nd 1876. So I am uncertain. Thomas Green was also an Irish Catholic immigrant who was doing quite well in the brick business is Sioux City, Iowa 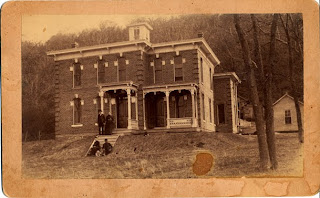 (The date of this photo is unknown, the home was not started in 1865 and not fully completed until 1875 but I do not know the date they actually moved in. This photo does not have any photographer markings on it at all. I only know that the top little look out portion of the house blew off in a tornado in 1890 so it had to be taken before that. So sometime between 1875 and 1890. The top has been rebuilt on the current museum.)

IT is a good example of rural american Italianate architecture and was quite luxurious for it's time.
The stair case is hand carved by O'Connor made of walnut cut from his property.
There is a marble fireplace inside that they had imported from Italy.
The fondation is built of rock, stones shifted and fitted together to create a solid foundation.
The home is now a museum in Homer, Nebraska.
Here is the website, it has a god-awful song that plays when you open though: 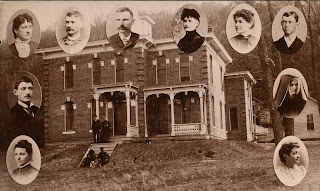 The date of this photo is unknown as well, There is an imprint on the card stock below the photo that reads:
Peabody's Studio, Lyons, NE
Lyons was not even an incorporated town until 1884 -- many of the children died in 1889, so I would imagine the photo was constructed before this time unless they just added the photo after the fact, which is entirely possible. They possibly even made this photo due to the death of so many of the children.

He had ten children total, many died early from tuberculosis except for my great great grandfather Cornelius J. O'Connor, Timothy and Helena.

I have contacted the Dakota historical society to see if they can tell me which one is which.
The only know which one Cornelius is.
My Grandmother believes that the museum does not have this photograph of the house with the ten children. I haven't heard back as of today.

I haven't been as successful about finding out information about the Captain in his later life, although I am sure he was quite busy. I am working on researching the next couple of generations of O'Connors.
Captain Cornelius passed away in Homer, NE August 15th 1902 and his wife Catherine lived until December 14th 1917, also in Homer NE.

Their son, My Great Great Grandfather, Cornelius J. O'Connor was a prominent member of Nebraska, ran a bank and held a couple of different offices.

His son, Arthur O'Connor, my Great Grandfather had tuberculosis and traveled to New Mexico's Fort Stanton for treatment.
I will be doing further Tuberculosis research in relation to Arthur and americas history.

I am doing my best to research and put dates and people together. If I am incorrect on anything it is not on purpose, and I have found conflicting dates on multiple things.

My name is Steve Green. We are related. My great grandmother was Helena, and I have the same pictures of Cornelius and her. I am forwarding this link to Rosemary Alva, who has done a lot research on the Green family. You might find it interesting.

I was at the museum today. They do hav a series of pictures of the children who died. "They may be the same ones used around the house picture you have. The pictures were labeled. They hed a lot of personal items, if you haven't been there yet or contacted them it may be worthwhile.